The need for the Central Broward Transit (CBT) Study was identified by the Broward MPO at the conclusion of the I-595/I-95 Master Plan. Continued development and growth in Broward County have signified the need for a premium transit service within central Broward County along an east-west corridor that will improve mobility, offer an alternative to single-occupant vehicles, and provide convenient access to major destinations.

Following the initial Alternatives Analysis, the Broward Metropolitan Planning Organization (MPO) adopted a Locally Preferred Alternative (LPA) for the CBT Project in 2006 to provide transit service from the Sawgrass Mills area in the western portion of Broward County to Downtown Fort Lauderdale via a mixture of highway, arterial, and local roadways.

In response the community coordination and additional technical analysis, the LPA was revised and re-adopted by the MPO as the alignment shown below in October 2012. 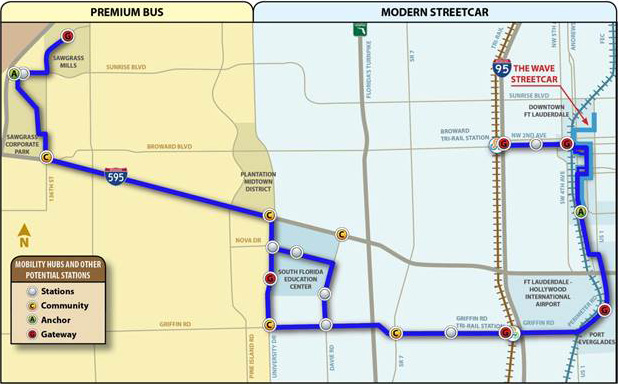 Phase 1 of the 2012 CBT LPA was planned to be an extension of The Wave streetcar from Andrews Avenue just north of SE 17 th Street to the Fort Lauderdale-Hollywood International Airport and Port Everglades. A draft Environmental Assessment (EA) was prepared and submitted to the Federal Transit Administration (FTA) for review in 2016. However, once funding for The Wave was withdrawn, Phase 1 of the CBT Study  project was also placed on hold.

In 2018, Broward County voters approved a one percent sales tax that established a dedicated local funding source for transportation improvements, including transit operations and maintenance. As a result, the FDOT and the project partners have decided to continue with the CBT efforts by focusing on the 3.8-mile Broward Boulevard corridor. For more information about the Broward Boulevard corridor study, please visit that project website at browardblvdtransitstudy.com

The Broward Boulevard corridor has many transportation opportunities as well as many challenges. The following is a sampling of the corridor issues that will be considered as a part of the BBPT Study project development activities:

Anticipated population and employment growth expected to exacerbate the problems described above.