How do I report a traffic safety or other highway safety concern?

If you wish to report a safety concern or have questions regarding safety of a state maintained roadway or property, go to FDOT's District Information page. You will see a map of the State of Florida divided into regions (Southwest, Northeast, Northwest Southeast and Central) Click on the heading "Telephone Directory" for your region to see a list of contacts with their telephone numbers.

"Won't a 'Traffic Signal' reduce crashes at our intersection?"

Traffic signals don't always prevent crashes. In many instances, the total number of crashes and injuries increase after they're installed.

Where signals are used unnecessarily, the most common results are a reduction in right-angle collisions but an increase in total crashes, especially the rear-end type collision. In addition, pedestrians are often lulled into a false sense of security.

In deciding whether a traffic signal will be an asset and not a liability, traffic engineers evaluate the following criteria:

Traffic engineers compare the existing conditions against nationally accepted minimum standards established after many years of studies throughout the country. At intersections where standards have been met, the signals generally operate effectively with good public compliance. Where not met, compliance is generally reduced resulting in additional hazards.

While a properly placed traffic signal improves the flow and decreases crashes, an unnecessary one can be a source of danger and annoyance to all who use an intersection: pedestrians, cyclists and drivers.

"How Do 'Pedestrian' Signals Work?"

The pedestrian signal sequence begins when the "WALK" indication is illuminated.  This sequence should be at least 4 to 7 seconds long and allow enough time to leave the curb and begin crossing the street before the clearance interval begins.   At locations where large numbers of pedestrians are crossing, a longer "WALK" interval may be warranted.

The pedestrian clearance interval consists of a flashing "DON'T WALK" indication.  During this interval the pedestrian should complete his crossing, however; he should not begin crossing on the flashing "DON'T WALK" signal.   The clearance interval timing is based on the street width divided by 4 feet per second walking time.  If elderly pedestrians are using the crossing it is recommended that the walk speed be reduced to 3.5 feet per second.  The distance is measured across the street: from the curb on the near side to the center of the last lane on the far side of the street.

The "DON'T WALK" indication, steadily illuminated, means that a pedestrian should not enter the street in the direction of the pedestrian signal.

WARNING - Both pedestrians and drivers must be particularly alert while pedestrians are crossing, especially when "Right turn on Red" movements are allowed.

"Won't a 'Children at Play' sign help protect our kids?"

At first consideration, it might seem that this sign would provide protection for youngsters playing in a neighborhood. It doesn't. 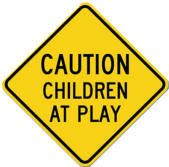 Studies made in cities where such signs were widely posted in residential areas show no evidence of having reduced pedestrian crashes, vehicle speed or legal liability. In fact, many types of signs which were installed to warn of normal conditions in residential areas failed to achieve the desired safety benefits. Further, if signs encourage parents with children to believe they have an added degree of protection - - which the signs do not and cannot provide - - a greater disservice results.

Obviously, children should not be encouraged to play in the roadway. The "children at play" sign is a direct and open suggestion that it is acceptable to do so.

Federal standards discourage the use of "children at play" signs.

Specific warnings for schools, playgrounds, parks and other recreational facilities are available for use where clearly justified.

"What is the harm of installing an unwarranted traffic control device?"

Traffic Control Devices (TCD's) such as traffic signals, stop signs and speed limit signs are installed to regulate traffic flow and improve safety. The installation of these TCD's should be based on the professional judgment of Traffic Engineers after careful study of the location to be controlled. The study should consider such factors as crash frequency and type, vehicle speeds and traffic volumes.

The March 1990 issue of "Public Roads" magazine, published by the U.S. Department of Transportation, contained an article on "Motorist Compliance With Standard Traffic Control Devices."

The article examined the following forms of motorist noncompliance:

The behavioral studies collected compliance and other data at a large number of typical sites over extended periods of time. In the process, hundreds of thousands of motorists were observed. The clear conclusion was that motorist noncompliance does take place.

On of the recommendations in the US DOT article was: "To ensure that the motoring public maintains a healthy respect for TCD's, traffic professionals must use them prudently. Through concerted efforts of the nature outlined above (Engineering, Enforcement and Education), the safety and efficiency of our streets and highways can be maximized."

Another recommendation was to "Apply TCD's consistently to ensure they command respect."